Soon, September passed by. It was no longer Summer though, situated as we were in the middle of Texas, still the heat would not relent. I was working 10-16 hours a day, six or seven days a week.

I spent a lot of my time with Steve.

“Any more of what?” I was really confused. We were looking at an abstract design for a computer-centric cards. One of the secret societies was called The Network, so naturally we had a lot of technology touch points in the game as well, and I’d painted it up in shades of green.

“No,” he said, turning away from the screen. “I don’t want to see any more green.”

I don’t think I said anything.

“If it’s not something like a tree,” he said, counting exceptions off one finger at a time, “or grass, or money, or an Army uniform — something that is supposed to be green — don’t use green. It’s a dull color. Stop it.”

“Why?” I asked, and when his shoulders tensed, I almost wished I hadn’t.

“Sure — all American school kids have to.”

“And the author described rotting wounds on the battlefield as green.” He shuddered. “It’s stuck with me. So I don’t want us to use anything green here. Please.”

Steve caught me in a strong stare. “Please,” he said.

I sighed. “I’ll tell the guys: no green from here on out.” I turned back to the computer. “As long as we still have red and blue to work with.”

Life went on like that, more or less, for nearly two months, in a blur of dark air-conditioned rooms, take-out meals, and computer-colored artwork reviews with Steve, peppered by the occasional playtest.

Pushing a mouse to color artwork for more than 80 hours a week — week after week — will do something to your brain. When the artwork you’re coloring is an extended vision of the power structures of the world and icons of your age and paranoid delusions, it’s possible to create in your mind a perspective that never before existed and may never should have.

The eye in the pyramid goes back at least as far as Ancient Egypt. In America, it most famously appears on the back of the U.S. one-dollar bill, though because it’s also been used for hundreds of years by the Freemasons, and it’s commonly believed that many of the Founding Fathers were brother Masons, some see the Great Seal of the United States on the back of the buck as a wink to the conspiracy that was the true force behind the birth of that new democracy.

The strength of the symbol is its simplicity. It’s a triangle with a circle in it — that’s all. It makes a perfect seed for paranoia because it takes two of the most simple shapes and produces something that crosses the lowest threshold of what our brains consider to be an actual signal against the noise of randomness around us. It’s a trick, exploiting the limits of our lowest levels of cognition to find a way into our minds. It’s a hack, bringing along whatever you attach to the symbol and giving it a stronger cognitive presence than the payload might have otherwise.

Every piece of art in Illuminati: New World Order has an eye in the pyramid in it, somewhere. Sometimes it had been spec’ed for the art, often I had to add it. In reviewing the art, Steve and I sometimes found even better places for them. It was fun. I spent essentially countless hours running a virtual brush along inked lines, watching as the forms abstracted out into their fundamental geometries: adding a subtle eye to a triangle that seemed to be begging for one, or adding acute angles in the shading to create a slanted cone behind a circular form.

What little walking around I did outside the office only made it clear to me how far gone I was. The eye in the pyramid was everywhere, when you were looking for it. The only pleasures I allowed myself were music and driving and comic books. The local comic book stores had begun selling collectible card games, given that everyone was buying them, so taking a break to walk around Dragon’s Lair or Austin Books was like walking through a story of economy and commerce that I was at that time myself living. The feedback loop was focusing in some ways, but in other ways not.

I stopped showering every day. I shaved rarely. I hadn’t had a haircut in months. I used to let the TV news run in my apartment, all the time, but by that point in the production I had to keep it off or my mind’s noise amplification would create too much signal. I even found myself struggling to avoid reading tabloid headlines at convenience stores.

There were secrets in the world, and if someone wasn’t going to tell me what they were, I was going to figure them out myself. I saw conspiracy everywhere, and it wasn’t just me. A lot of us were becoming similarly afflicted, one way or another, which only seemed to make the game deeper. A few of the things that bounced out of our heads in that time strike some people as eerily prescient today, like the card that shows the New York World Trade Center’s twin towers, cropped closely, with one tower exploding from its middle. 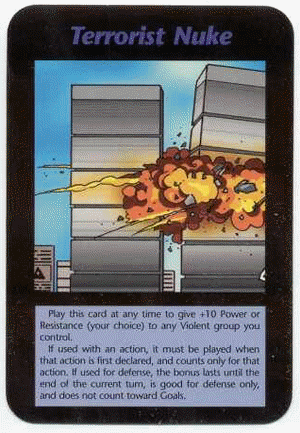 All I can say is that everything we put in the game seemed very plain to us at the time. I don’t know if that’s a reasonable explanation given that I had become delusionally paranoid.

It all made sense, in a fragile sort of way. And while I was dropping card art into the layout, it struck me that the cyberspace I’d long anticipated, that I yearned for, had come true in the form of modern design tools. Those geometric abstractions of pictures and text and boxes that I’d spent days creating and flying over, and which I still struggled to control, described a virtual reality of locations and people and forces which had been designed for the sole purpose of fighting it out with one another.

I decided I’d been in cyberspace for years, and never even realized it.

All the fears that had welled up in my head for so long were wrung out into that production, and all the pieces that my paranoia put together culminated in an last, fevered round of color correction and art tweaking. The artists themselves, the illustrators, were beginning to feel exhausted, though we were close enough to the end that it didn’t seem to matter. We had what we needed to be successful. It didn’t take the whole two months for Rick to develop into a Photoshop powerhouse, and Jeff was turning in work that I not only didn’t have to touch up, but which I knew was better than the job I’d have done on the same thing. He was more than good enough, by then. He’d developed a genuine skill there, and in the darkness of my office it was impressive.

I wasn’t alone in those last weeks. Steve was there with me, and he looked close to as worn out as I felt. We spent an hour or two every day reviewing art, tweaking it there — between getting faster with the tools than I thought possible and lowering my standards slightly, I was often able to get Steve to sign off on a card at first glance by making quick changes right there in front of him. He’d rap on my war-surplus metal desktop that a piece of colored art was now good and we’d move on to the next.

One day, I don’t remember why, I stumbled out of my office. It was late, probably close to midnight if not past it — Steve regularly stayed in the office until at least two in the morning — and we were the only two people in the building.

He pushed himself back from his desk, squinted his eyes, and shook his head.

“How did what happen?” he asked.

“Illuminati,” I said. “Ogre was your first baby, though — taking nothing away from how awesome it is — it’s kind of taking something that already existed to its logical conclusion. And GURPS is taking the point-balanced role-playing game and doing it right. You have this real knack for taking things that already exist and making them better — much, much better. But Illuminati is its own thing. I’ve never seen anything else like it. You’ve done some genius-level stuff, no doubt, but where did Illuminati come from?”

“It just came to me,” he said quietly. “I was driving down the road, back from a friend’s house, one of those long country roads out here, and—” He looked up with a widening smile, as if the heavens were opening before him. “I could see it laid out before me. I pulled off to the side of the road and I immediately began taking notes. And that was Illuminati.”

I don’t know if what he said was true, but it felt true.

The next night, not a week before I’d ship the game to the printer, Steve caught my eye walking past my office. I don’t know why I’d left my door open.

With no introduction, he said, “I’m color-blind.”

I’d like to think I made no response. “Not badly,” he quickly followed, “not in a terrible way. I can see color just fine, just a little less so than some people. So things look better when they’ve been pumped up a little.” He frowned. “I probably should have told you that earlier.”

“It would have made things easier,” I said.

The next morning I showered and shaved and I arrived early, where again Andy was kicking boards in half up in the rotting stable. Wordlessly I joined him, knocking down posts, busting open a knuckle on a too-thick board, working up a sweat.

“Good morning,” he said. It was the end of October.

“Yeah,” I said. “I am.” Andy waited for me to say more. “You know the story about the caterpillar and the, I don’t know, some other bug?”

“The other bug asks the caterpillar, ‘Hey, you’ve got a lot of legs, how do you even coordinate them all? How you even walk at all?’ So the caterpillar thought about it, and after that he was never able to walk again.”

I checked my mind. Somehow, it was quiet. It was mostly empty, in order, like it hadn’t been in a very long time.

“What I’m saying is that I’m not thinking any more about how I’m walking,” I said. “So I feel okay. I don’t know why, but I’m not going to question it.”

He laughed. “Well, keep on walking, man. We’re flying to Michigan for a press check in less than two weeks.”